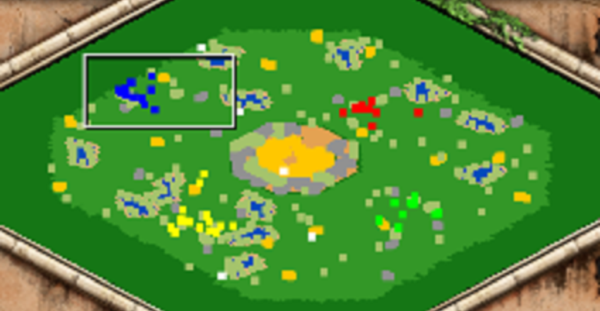 Druids made by Martinus This map is similar to gold rush. You can find huge amount of gold in the middle of the map, surrounded by stone. There are gold and stone sources around your town, but not that much. You can find different wood and food sources too. There another difference, that make this map unique is that in the middle, there are druid archers, who guards the center gold area. The druids can change their human form to animal forms with different traits. In their human form, they have health regen, and multi shooting bows, with high range. After they lose all their healt, they change form. The first after their human form, is the tiger. In this form, the druid become very fast in both move and attack speed. They also have health regen, but not that effective as in their human form. After that, the next form is the boar. In this form they can "spit" (or shoot) deadly moonfire balls of energy in middle range, with increased healh, and movement speed, but no health regen. Their last form is the bear. They throw (or shoot) deadly sunfire balls of energy, and they also have huge amount of health. If you could beat a druid, they releases the spirit bomb with their last breath, which deals a lot of damage in a large area. The reward for defeating a druid is a relic (actually a monk with a relic, because if they only drop a relic, and a monk pick it up, the game crashed for me.) (There is no version of this map without the druids, because that would be just a regual/another gold rush map in my opinion.) There is no elevation, because it crashed the game for me... --- I want to thank to other random map creators and the online random map script guides. Without them, this script would not have happened. --- I hope you will enjoy playing on this map!!!