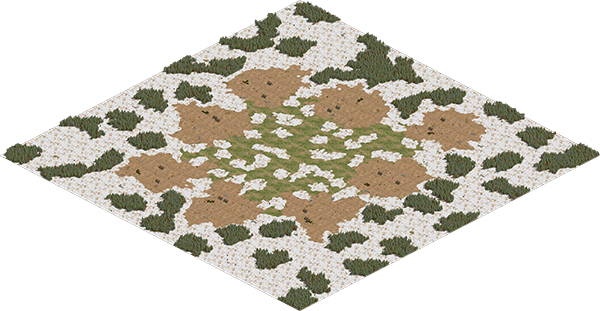 Steppe is the only nomadic start in the East Asia stage, where players spawn with additional resources for their town center. The map also starts with an additional three villagers, three houses and a horse in place of the scout cavalry. The outskirts of the map are covered with generous wood lines and the occasional extra gold or stone mines. However, Players are still lured to the central plains of Steppe for the extensive deer population despite not being able to lure with their horses, additionally most of the starting gold and stone mines are vulnerable in their player clearings. This overall design can encourage aggressive play throughout the early game depending on how teams choose to approach Steppe.

Download map
Website
This upload is managed by: T-West
Tags: ECL East Asia
Versions: WK
Information
This map contains sling nerfs: * Base tribute tax percent is increased from 30% to 40% * Coinage is moved to the Imperial Age * Banking is removed