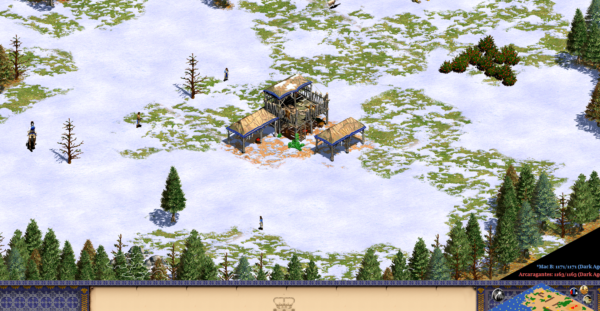 Tripoli bay, where generations of conquerors have landed their feet; two players comprise the starting locations. The first player begins on an offshore island, next to another smaller island. Both are quite compact and decently rich with resources. The second player begins in the expanse Tripoli desert, amongst thin wood lines and ample mines to take from, though more spread out than their islander counterparts. The goal of both is to stop the other from expanding - remaining in your base is tantamount to suicide. While you boom, the other player may be spreading out to take the precious limited resources of the third island or outskirts of the desert. You will need to balance map control with economy in this irregular 1v1 map.

Download map
This upload is managed by: Mac_B
Tags: 1v1 Water Hybrid Irregular Start Islands map control arabia islands Tripoli
Versions: HD
Information
- Normal 8 sheep 2 boar start + deer and forage - One player starts on a small island, neighboring a smaller island, both compact with resourches - The other player starts in the middle of a broad desert, outfitted with many resources sprawled across it - Both players will need to expand outward into the desert and wrestle for water control and thereby control of the third island - It is strongly incentivised to go for water control as the smaller island player as that is the primary edge of the starting location - The desert player can expand further into the desert or try to fight he water player early - Those are just reccomendations though, don't let me tell you how to play the map - Uneven/Irregular Start - Made SPECIFICALLY for 1v1s - not optimized in any capacity for team games! - Made on HD