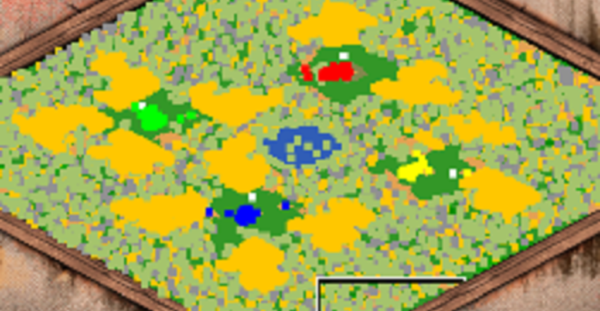 unBEARable Treasureland made by Martinus This map is similar to the unBEARable Forest, but it has some twist. The map is rich in gold (mostly) and stone, but not in trees. The only wood source is around your town center in a couple of trees in two groups, but the last forever. At the center, there is a lake with high amount of food sources. In the forest, you can find extremly aggressive bears, with huge amount of health, who don't like those, who's trying to touch their berries. They growls from distance to those who get close to them, which casues fear among their targets resulting them to lose health. If you defeat a bear, it detonates, causing damage to the surroundings, leaving a crater. (There is a version of this map where power bears replaced with regualr bears too.) No walls this time, just castles early defense (in regicide mode, you get four bombard tower and a market). You start with increased amount of wood and food (so players can step up the ages fast early), but no gold and stone. I highly recommend to play against Thermopylae AI (you can find it on the aiscripters forum), because they can handle very well the bears. Other AI's can play too, but some of them, resign easily or just collect resources, without stepping the ages and forming armies. (I don't know why...) --- I want to thank to other random map creators and the online random map script guides. Without them, this script would not have happened. --- I hope you will enjoy playing on this map!!!