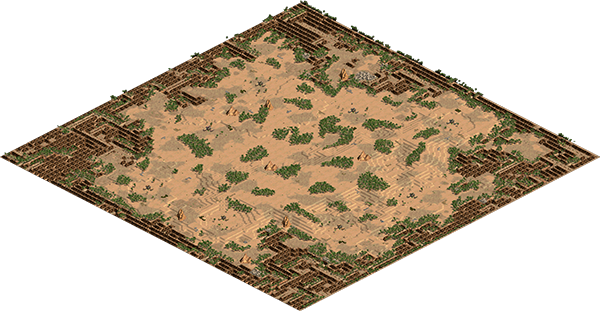 A dry map with large clusters of cliffs around the outside representing the mesas in the southwest deserts of the US. There can also be central cliff clusters, but even then, gameplay is very open. Wood is scarcer than it might seem from the screenshots (because much of it is intentionally inaccessible in cliffs), and will require setting up lumber camps along the edge of cliffed areas. The controlled cliff techniques shown in this map were pioneered by me [Zetnus], and I believe are still pretty unique and not seen elsewhere. Winner of the Americas region of the map competition.

Download map
Website
This upload is managed by: T-West
Tags: ECL America Zetnus Cliff
Versions: WK
Information
This map contains sling nerfs: * Base tribute tax percent is increased from 30% to 40% * Coinage is moved to the Imperial Age * Banking is removed Winner of the Americas region of the map competition.