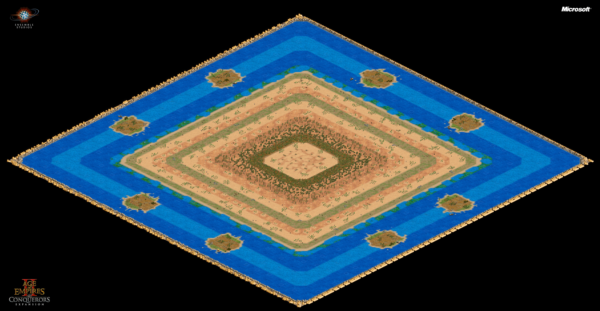 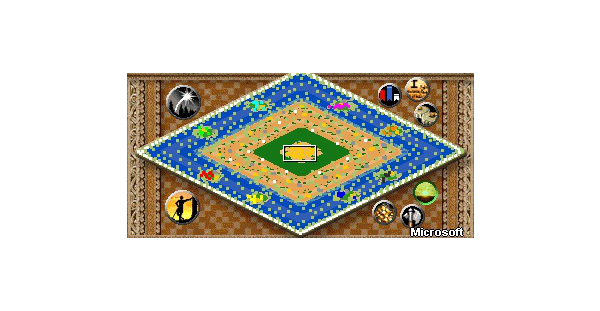 In this map the settlers found some nice small islands in the coastal waters of a suspicious square land. Scouts reported an abundance of gold and trees on this island, but your people are hesitant: they rather set up camp on the small food-rich islands. The players with a firm navy control dictate the game forcing brave settlers to restart a civilization on the Mysterious Island in the middle. But then a storm breaks lose, causing many boats to sink. The storm grows in power and will even threaten those on the mainland, untill the whole map is coered- with the exception of the clearing in the middle. Can you survive?

Download map
Website
This upload is managed by: Henkdesupernerd
Tags: FFA Battle Royale Diplomacy Migration
Versions: WK UP1.5
Information
requires WololoKingdoms and UserPatch 1.5 This map has the option to be played as a combined regicide+ King of the Hill to select regicide as part of the script, select LOW_RESOURCES in the gameroom. This will not have any affect on the starting resources. Doing so frees up the possibility to select other gamemodes such as King of the Hill Each player starts on a tiny island. The starting island has enough resources to boost the early game, but the resources will run out around the time players hit castle age. All islands are surrounding a large landmass which provides buildings space, and resources for the late game. Players start with no Town Center but with a transport. They can choose to either stay on their tiny island, and migrate to the mainland later, or risk the crossing to the main land from the start. Setting first foot on the mainland has the advantage of being able to choose a nice location, but their economic boom will be delayed compared to those that build a town center right away. Also, a large number of wolves make a crossing to the mainland dangerous before the villagers have loom. In the middle of the mainland within a thick forest there is a clearing where one can find gold piles on cracked earth. In the very late game, this is the only safe area from the storm and the only accessible resources, once the rest of the map has been swallowed by the storm. This area is also revealed to all players. The storm starts at 30 minutes and will start damaging stuff at the map's edges. Every 5 minutes the explosions will creep towards the middle, leaving only a small middle area as a safe- zone. The explosions will ramp up over time in severity. At start it only does minor damage to buildings, but this changes quickly. This will force the players to move towards the middle, where they will face one another. The explosions will advance 14 times: at 0:30:00, 0:35:00, 0:40:00, 0:45:00, 0:50:00, 0:55:00, 1:00:00, 1:05:00, 1:10:00, 1:15:00, 1:20:00, 1:25:00, 1:30:00, and 1:35:00 game time. An indication of the reach of the explosions is seen from the terrain changes.
Changelog