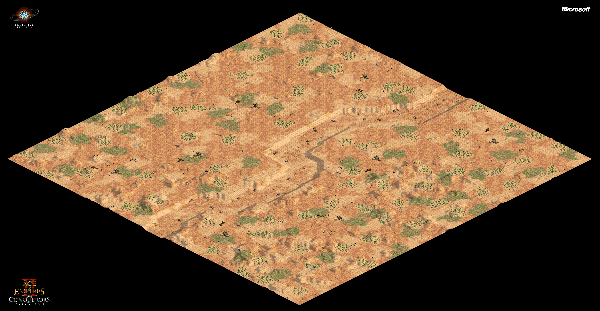 In this map crossing the dry riverbed that separates the player teams can be very dangerous as well. Not only do units find themselves in a lower elevation (and are thus vulnerable due to the elevation penalty). But also, the riverbed hosts some dangerous lions. Furthermore, little cover will be found in the wadi, making it nearly impossible to wall in this region or to hide a group of archers. The valley however does include all the neutral stone and golds, as well as some useless rocks. Like the design of the East Asian map DragonCrossing, the players in this map are distributed in a wavy line in the middle of the map, flanking the wadi. Compared to that Asian map, the valley of the map Wadi is curving more gently and the players are located at a further distance to enemy teams. Still the conventional flank-pocket-pocket-flank system is different in this map, as some players might find themselves more exposed and will need support from either flank or pocket. Even though stone and gold piles are found in the middle, the back of the bases will come into play as areas that provide wood lines and a nice trade route.

Download map
Website
This upload is managed by: Henkdesupernerd
Tags: 4v4 3v3 2v2 Middle East
Versions: WK UP1.5
Information
This map was HenkDeSuperNerd's submission for the Middle East stage for the ECL map-contest read more here: https://www.aoezone.net/threads/ecl-map-design-contest.138831/page-4#post-580536 All of Henk's submissions were collected in this voobly-mod: https://www.voobly.com/gamemods/mod/1033/Henks-Map-submissions-for-ECL